It’s summer! And for lots of us, that means it’s time for a road trip! It’s hot and the kids are getting the house dirty for the 132nd time today. And in the summer, we promise to fit in as many fun things as we can for our kiddos who are out of school for a few months. Sounds like a good time to hit the road!

Here are a few things I’ve learned about taking a road trip with little ones. (Mine are twin 6-year-olds and a 2-year-old).

#1  Bring along a few fun activities that can be done in the car without creating a huge mess.

My kids were lucky enough to be given Kindles for Christmas.

They love to play games on them in the car. Lukas even took a short video of a train passing by on his kindle so that Asher (who had been BEGGING to see a train) could see it when he woke up from a little car nap. Another thing my kids love is drawing and writing. (As a Language Arts teacher, I LOVE when my kids practice creating words and sentences on their own.) They each have a journal and a Ziploc bag holding a few writing/drawing tools to use. My favorite part on this trip was when Eisley wrote a note to her daddy who had stayed back home.

My least favorite part about the drawing tools was when Asher failed to use a journal for his writing. (I strongly suggest you use washable markers. They clean up much easier than crayons, pens, or other markers. They even wash out of clothing or car seat fabrics better than pencil or pen marks.)

I failed to bring enough snacks on our road trip. On the way, I promised the kids they could go into the gas station and pick out a treat when we stopped. Eisley and Lukas debated the various types of M&Ms. (Who knew there were mint M&Ms?) While Asher wanted to purchase an ENTIRE BOX of sour skittles. They also wanted nachos, spinning suckers, Cheetos, chocolate milk, Slush Puppies, and several different types of gum.

As I bartered with each one to make sure they got to pick out their promised snack, to ensure we didn’t knock over too many display cases (I find that the acceptable number of knocked down display cases is surprisingly low), and to not lose any children in the store, I found myself thinking, “This is why it’s always nice to have a higher adult/child ratio when traveling.” If I had planned ahead and brought snacks with me, we could have stopped at a rest area and then just quickly filled up with gas afterward without spending $12.38 on junk. And without making the man behind the counter nervous about the candy Lukas carried around in his pocket because his hands were full.

It all worked out though. The bartering and the temporary chaos were TOTALLY worth it later when the kids were getting tired of the car and we got to pull out the extra fun snacks. #3 Be prepared to stop so you can choose your stop locations wisely. As I said before, I should have packed snacks more thoughtfully. I know stops are inevitable on a road trip. But stopping at a rest area is always much less stressful, costs $0, and accomplishes the same basic goal (unless gasoline is needed). The kids need to get out and move around a bit, especially Asher, who is still in a five-point harness car seat. They also need to go to the bathroom frequently. If they don’t need to pee every two or three hours, then I clearly am not pushing enough liquids. And we will have other things to worry about later (like dehydration or constipation).

I plan to stop every 2.5 hours. But I also try to know what will be available during that stretch of road. There are long stretches of NM freeway that have no rest areas.

Colorado seems to have fabulous rest stops every 90 miles or so. It’s definitely worth looking at (or watching the signs for) so you can save yourself the trouble of having to barter with your children for 30 minutes about which snacks/toys/stuffed animals/t-shirts/jewelry they desperately need at the gas station.

Sometimes someone needs to stop and there is nothing near enough for a tiny bladder that waited until the last second to tell you they needed to go. If you are worried about those emergencies, I will admit that I also took our little potty training toilet along with us in the car. I am not above using it myself if it comes down to it.

We ran across SEVEN construction zones between Albuquerque and Denver. Most of them were pretty simple and just required lower speeds for a few miles. But when we got behind a huge semi-truck carrying some sort of flammable liquid going 35 miles per hour for 7.5 miles through the down-to-one-lane-Raton Pass, I was definitely not excited. Asher was ready for a nap but wasn’t falling asleep. Lukas and Eisley had started to argue about some crazy detail in a movie or game. But I knew the most beautiful part of our road trip was coming up. We took advantage of the SLOW speed and took in all the details of the mountains and the view that we could. We didn’t get a picture of the prettiest part (because a 6-year-old was in charge of the camera). But we sure did enjoy looking at the trees, the valley, the railroad tracks, the cutaway rocks, and more.

#5 You can’t schedule meltdowns or hyperactivity. But you can throw the schedule out the window and find a space that can handle it.

As we got to Denver, it became apparent that we weren’t quite going to make it to our destination (Greeley) without stopping again. Every child in the car was crying or yelling, just needing to get out and MOVE. I saw a sign for Chick-fil-A and immediately pulled off at the exit. My kids pretty much hopped all the way into the restaurant. Asher almost knocked down an elderly man carrying four ice cream cones. He screamed a lot (Asher, not the old man). And people stared at my wild child. I could tell my kids weren’t thinking straight. They were tired and needed to exert themselves for a bit. They didn’t want to eat. I didn’t want to make them. Save the sitting and eating for the car! They were so excited to just play! In and out of the tunnels, the slide, the stairs. I gave them a time limit at the beginning and was sure to give them lots of warnings about time being almost up and that it was time to do their favorite thing two more times.

The stop added close to an hour to our road trip. But it was a much-needed break for them.

I know I can push through because I understand that I’m almost there. But that’s a hard concept for kids to grasp. They don’t realize that by the time they get in and out of a simple fast food restaurant, they could have driven the last hour and been there. I also know that if I push through and my kids have passed their limit, I will have to endure screaming, tears, begging for unreasonable things that I can’t give them at the moment, kicking, hitting, pulling hair, and more. It’s probably not safe for me to drive while I try to handle all that. So roll with the punches (literally), and do what you need to do to make sure you get to your destination in one piece, even if it is 4 hours later than you hoped.

#6 Is a road trip really worth it?

Every time I think of making my kids get in the car for more than 30 minutes, I really have to ask myself, “Is it worth it?” Is it worth the effort of packing the stuff, loading the stuff, planning the things, making them use the restroom, getting them in the car, driving and driving and driving, stopping (and stopping and stopping), listening to them argue or whine or ask, “How much longer?” for the 98th time? I can honestly say, I think every trip has been worth it. Yeah, they’re hard. Yes, I want to lock myself in a dark, quiet room for a few hours by the end. I absolutely feel like I deserve a massage and a hot tub soak when we get there. But it’s totally worth it.

The memories we make on the way, the conversations we have about land formations, traffic rules, spending/saving money, being respectful to other people in stores and restaurants, the sense of confidence the kids grow as they learn and try new and different things . . . all of it makes the hard stuff totally worth it. Not to mention, we got to spend time with the cutest little one-year-old and my SISTER. I am so excited that my kids are becoming better travelers.

Adventure is waiting, just down the road! 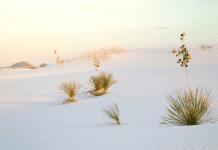 Dena Fahlquist - May 26, 2022 0
School's out, which means summer is in session! Hello, sunshine, warm weather, and laughter into the late evenings! I can already smell the BBQ...