In-person school saved my family. It really did.

Ezra, sit up. Stay still, pay attention. I’m sure this is engrained into his tiny little head. Virtual school was supposed to be three weeks. Instead, it is still that way almost a year later. I know teachers have adapted. They’ve tried so hard and become quite innovative. But virtual school isn’t for everyone. 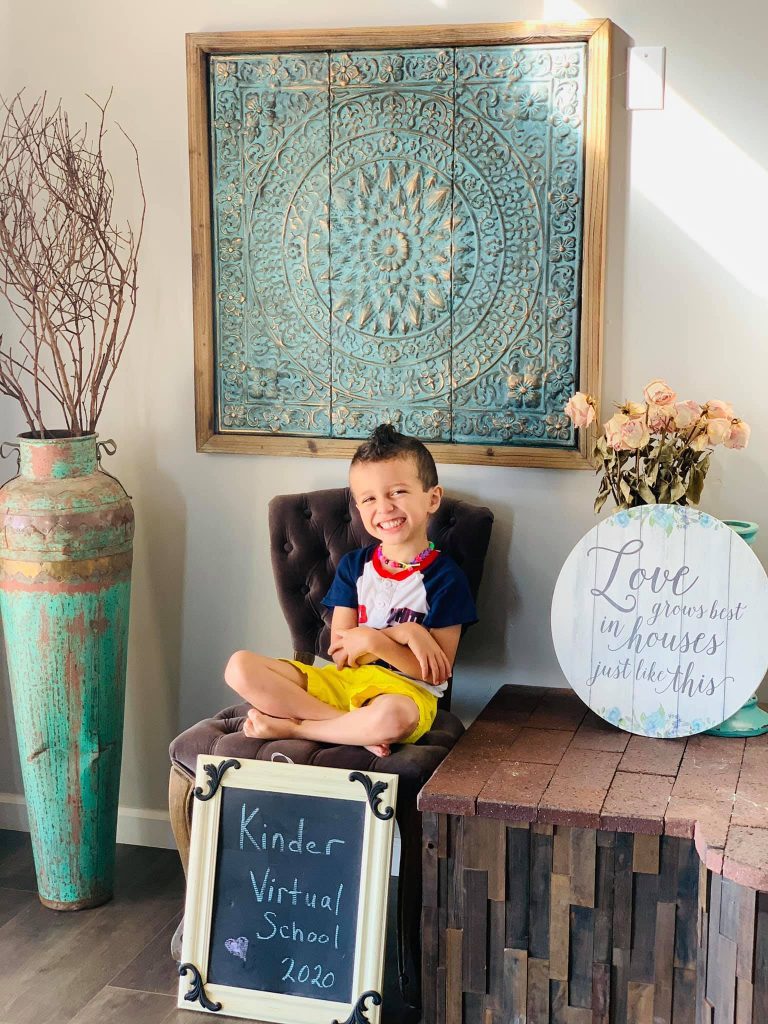 My oldest would complete all work in two hours. Meanwhile, the middle child was constantly spinning in his chair, doing handstands, telling jokes, running out of the room.

I think it is important to explain that while there are outsiders looking in, seemingly all the time, a lot of people fail to understand that although the entire world is weathering the same storm, we all have very different boats.

On the outside, someone who works from home and has a spouse that does the same sounds incredibly lucky. On the flip side, my husband cannot deviate from work. He’s on Zoom call after Zoom call for 8 hours a day. I, on the other hand, have very time sensitive transactions that any one mistake can cause a client to lose a ton of money, and me to lose my license.

We are one of the “lucky” districts who was allowed to, and chose to resume in person learning in the state of New Mexico.

I know how some people think of parents who send their kids to school during a pandemic. I am a huge reader of comments. Parents who sent their kids to school were called selfish, murderers, people who are lazy and need babysitters, the list goes on. But that isn’t the case. A teacher should never be considered a babysitter. They are helping to mold our kids into the adults that they will soon become. They are a huge part of their lives, and I am forever grateful.

I mask up everywhere, wouldn’t mix households in the beginning, sanitized groceries, cried thinking that my grandparents would die if they went to get groceries, yet too scared to buy some for them in fear that I would somehow have Covid and transfer it to them by touching their grocery bags.

So when I say I was worried about Covid-19, it wasn’t an understatement.

As the science evolved, however, so did my stance. I still do not want to catch Covid or pass it on to anyone, but I now know how to lower the chances of this happening. I have friends who sent their kids back to school in other states. I’ve read every article that came across my desk when it comes to kids and Covid-19 or school transmission rates.

The science is clear. From what I read, kids are not the main source of spread and schools are not transmission hotspots, IF safe Covid-19 measures are practiced.

There are two straws that broke the camel’s back. The first happened on a hike. My oldest daughter asked why people were smiling at her. I told her it was likely because they were happy that she was out enjoying the volcanos. Instead, she was sure they were plotting to kidnap her.

The second was my son’s report card. We focused so much on getting him to sit still, or me doing work while he was left in the room with his computer, that nothing was getting accomplished. This isn’t to say that other kids are not doing well with virtual school.

I’m sure there are many who are. My son was not. I could not sit there and ruin his morale by him being the only one in class who didn’t get certain things right. Teachers were helpful and encouraging. Nevertheless, he soon noticed that he wasn’t understanding. He called himself stupid and dumb. My son is very confident in himself, so this was out of character.

I called the school and asked if there was room to send my kids back to school in the hybrid model. There was room! The first drop off was tough. My son clung to me, screamed, and cried. He was so scared. No less than 4 teachers/staff helped aide in the transition. From de-escalation tactics, to making him feel seen and heard, to offering some fidget toys, to saying that they understand, they, too, get scared when starting a new job. He still left crying, but then the magic happened.

His teacher emailed me at 10:30 and told me he was happy and participating. In the coming weeks my son went from doubting himself to recognizing many site words, blending words, doing simple math problems, having “1 million trillion friends,” and being sad when the weekend comes.

The stress went away, completely.

There have been some Covid cases at the school. The first email made me nervous to my core. Then the second and third. I checked the website periodically to see if any spread happened from these cases. Guess what? It did not!

The school has very strict guidelines to follow. Masks must be worn at all times other than when eating or drinking. The kids eat lunch in the cafeteria, two kids to a table, and distanced six feet apart. There is constant hand washing and sanitizing, along with games to keep them social distanced without scaring them. I heard a teacher asking kids to use zombie arms, another asking them to use superhero arms.

The staff really cares for these kids. They are pouring their all into teaching while risking their health. These are the real super heroes. Whether its virtual or in person, I am grateful for every staff member that has been present during this shift. Our world is far from our old normal, but if we don’t adapt, we become obsolete. Now is not the time to become obsolete.

Now I know that not everyone will agree with me, and that’s okay. Remember that we all make our own decisions based on what we think is right for us.

Please be kind to those who choose differently than you. We have so many other things to focus on right now. If you are sending your kid back to in-person school soon and are nervous, I hope that I have helped ease some of that with this article. Stressed About the Test? Insights into Admission Testing An Insider’s Guide to Tuition Assistance