I was sitting on the couch when I finally gave in and downloaded the infamous TikTok app. I kept telling my ten-year-old daughter that I would die the day I download it. But it’s safe to say I’m still here. After binge-watching three hours of TikTok, I quickly discovered something. I’m a millennial. I know, I know. I can’t believe I found out I’m a millennial from an app that wasn’t even made for my generation. But thankfully I wasn’t the only millennial bummed to find out we are now considered “old” through an app. Now, I know technically we are not “old,” but according to my daughter having a Facebook is only for the old. I’m not sure I agree, but that could just be me denying the inevitable. However, this made me reminisce the days I considered hip and cool. I catch myself more and more saying “back in my day” a lot. So I figured I’d throw “some back in my day” millennial memories in honor of my discovery of being a millennial.

CD players were bomb as long as you had batteries.

So growing up as a millennial, if you had a CD player you were cool. We would listen to them on the bus ride to school or if we got lucky the teacher let us listen to them in class. But one problem we had with our CD players was our batteries. If you didn’t have spare batteries and your favorite song was interrupted by low battery, you tried everything. Pop the batteries out, shake them, switch them, lick them (come on we all heard that rumor), or maybe ask the person behind you for batteries. Of course, they never had two, but one battery. It didn’t matter as long as it was enough to get you home. Ahh the good ol’ days. Landlines, caller ID, and three-way calls were cool as long as you had a cordless phone.

For the longest time my dad refused to get caller ID. Apparently “back in our millennial day” getting caller ID was an extra charge my dad didn’t want to pay. However, my friends had caller id which was cool for our slumber parties. We would get numbers of our crushes and call them. It was an intense time. Sometimes my friends and I would three-way call a boy. One person would do the calling and the other would be silent while we try to see if her crush liked her. This was our way of providing constructive criticism. It didn’t always go the way we wanted, but we did it anyways.

Myspace was cool and you always had a friend in Tom.

I believe I was in high school when I created a Myspace profile. It was definitely the thing to do. I loved being able to change backgrounds from “pimp-my-profile.com” so that it fit your current mood or attitude. Do you remember being able to create your Top 8 friends list so that everyone could see where they stood? Trust me making the top 8 was a big deal especially if you wanted to be in on the gossip. If you weren’t in the top 8, it pretty much meant you weren’t important. Lastly, I don’t want to forget the excitement of opening up Myspace and seeing all your notifications. Those were the best!

Sitting by your stereo hoping to catch your favorite song on cassette.

Another big thing for this millennial was sitting by my stereo waiting for a song to come on so I could record it on a cassette. Youtube came later so this was my way of bunching all my favorite songs together without having to wait for the radio to play them. This took strategy. Friendships were sometimes online if you missed the song. I mean do you remember the days of flip phones and the extra charge for ringtones. Recording your favorite song from the radio with your flip phone was also just as intense. It couldn’t be too loud or to quiet. You had to record right when the chorus hit or you’d have to wait another hour to try again. The struggle was real.

I’m a Millennial and that’s okay.

I should have known I was a millennial. But at the same time, I think I chose to deny it for so long. It seems like just yesterday I was doing all of these things without a care in the world. Telling myself the infamous words “when I get older…” But now that I’m older my distant memories of being a kid are my treasure. Millennials are a special generation growing up with the changing of technology. We are able to adapt and adjust accordingly without much trouble in the ever-changing world. But of course, we grow up and things change. TikTok may not have been for me, but I’m okay with that. I’ll keep my Myspace memories because at the end of the day I always had a friend in Tom. 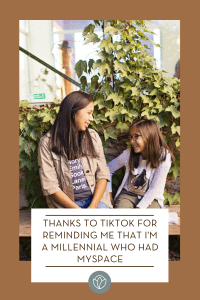