Every true New Mexican knows that August & September is this magical time when the most delicious spicy green chile get thrown in a metal cage over an open flame. Roasters then char the chile until its skin is burnt and its fleshy insides cook to perfection. It’s a glorious, glorious thing.

Those not from New Mexico might not understand the intense love of the stuff that the entire state shares. It’s so ingrained in our culture that “Red or Green?” is actually the official State Question.

The New Mexico Secretary of State’s website states, “In 1996 the New Mexico State Legislature passed a House Joint Memorial declaring “Red or Green?” as the official state question. This refers to the question always asked whether one prefers red or green chile when ordering New Mexican cuisine. This measure was passed to signify the importance that the chile industry has on the economy of the state.  New Mexico produced 99,000 tons of chile in 2000, valued at nearly 49 million dollars, the number one cash crop in terms of sales in the state.  With the adoption of this state question, New Mexico is acknowledging the financial gain and national recognition that chile generates for the state.”

But if you’re not from here, you might be wondering, “Huh??”  Let me explain. 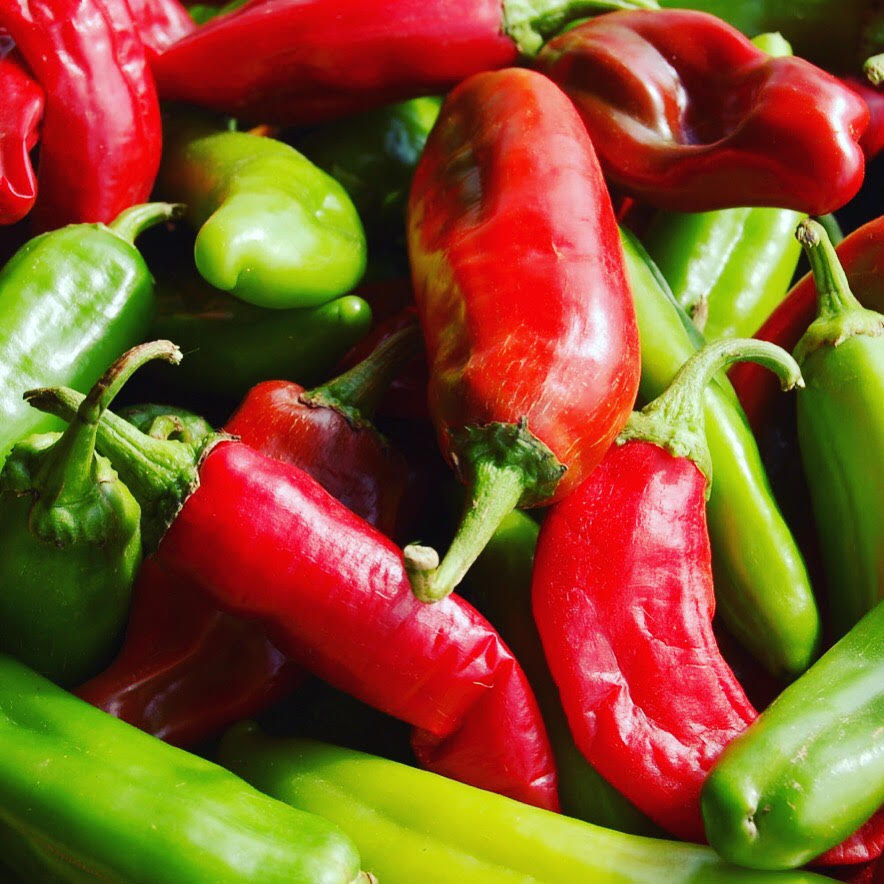 “Green Chile” refers to a type of elongated pepper which comes in a variety of heats. The chile pepper starts out green, but like a tomato, if left to continue ripening, it will eventually turn red. In most places you will find mild, medium, hot, extra hot, and then even the occasional extra EXTRA hot. The raw green chiles are then put in a metal roaster which blisters the chile’s skin over an open flame. The charred skin is then peeled off. The end result is a cooked, peeled green chile.

In New Mexico, going to get your chile is an event. Most people will get a bushel (roughly 25 lbs) or a “sack” (usually 35/40lbs). They’ll have it roasted and take it home. And then they’ll spend spend the rest of the afternoon peeling, chopping, and bagging the chile for the freezer. The goal is to get enough to last until next year’s chile season.

Typically, we roast the green chiles and dry the red chiles. Most commonly, you will find red chile sauce made out of the dried chiles, garlic, salt, cumin, and water (or stock).

The best part about it all is that you can put green or red chile on EVERYTHING.

Go to (almost) any restaurant in New Mexico (even McDonalds!) and they will have the option to “add green chile” to just about anything for a nominal fee. It goes on burgers, eggs, sandwiches, steaks, potatoes, rice, burritos, enchiladas, tacos, YOU NAME IT.  And it’s a surefire way to make anything and everything taste just a little bit better. My favorite? Green Chile Rellenos: breaded & fried chiles stuffed with cheese!

To New Mexican transplants, it’s almost a sacred thing. Every year, I see friends who have moved to other states rejoicing on Facebook that they have found New Mexico Green Chile in another part of the country.

It’s something you can only get here, and it’s something that, if you catch the bug for it, will stay with you forever.

Not sure if you’ll like it? It’s a must-try if you’re going to stay in New Mexico. You can get the mild stuff that still has a great flavor but little heat, the extra hot stuff that might make you wish for some relief from the pain, or something in between. Most grocery stores have small bags already pre-roasted in their produce section.

You can also go to specialized farm stores (like Sichler Farms, the best chile in the state, in my opinion), where selling roasted green chile is their bread & butter. They’re knowledgeable enough to help you find the amount and heat that’s perfect for you. You can also purchase a variety of other goodies based around chile (Green Chile Pistachio Brittle, Red Chile Jam, salsas, ristras, wreaths, etc).

Green chile might not be your cup of tea exactly. But it’s a rite of passage for every New Mexican, whether you’ve been here for a day or a lifetime. I’d be willing to bet, once you’ve tried it, you’ll never go back! 5 Ways to Connect with Your Kids When Life Is Busy