I never expected to have preemie babies. My first pregnancy was considered “normal” in the medical world. I didn’t have high risks or any issues for the first eight months. That all changed exactly one month before my due date. I woke up shortly after 2:00 a.m. with intense cramping pains and went downstairs to drink some water thinking I was probably a little dehydrated from the summer heat. I tried to watch some TV hoping I would fall back asleep on the couch.

However, the pain just kept getting worse, and around 6 am, my water broke. Although I didn’t realize that’s what was happening. It wasn’t a huge gush of water like you often see in the movies. It was more like a steady stream of liquid. After about 10 minutes of the water slowly coming out, I finally realized that I might be in labor! I hadn’t even considered this option since I was only 35 weeks pregnant. I quickly woke up my husband, and he called our doctor. She said to come to the hospital immediately so they could check me.

We weren’t even packed for the hospital yet. I quickly threw some clothes and other items in a bag . . . not sure what the day would hold.

By the time we arrived at the hospital, I was having stronger contractions. Sure enough, once they checked me, I was 5 cm dilated. My husband frantically called both of our parents to let them know our little one was coming earlier than expected.

Our sweet girl was born later that evening. She was a tiny thing, weighing in at 4 pounds 9 ounces. We were told she would need to stay in the Intermediate Care Nursery for about a week because she had jaundice and had trouble eating on her own. I was discharged from the hospital the next day, but I hated the idea of leaving our newborn in the hospital. The staff was so kind and helpful. They let us stay in a hospital room that was typically available for out-of-town NICU parents, but no one needed it at that time. We were so grateful to have the opportunity to stay close to our daughter.

The few days following her birth were a blur. I was trying to breastfeed, so I would be there every 3-4 hours to feed her and hold her. Any spare time my husband and I had between feedings was spent eating, showering, or trying to sleep. Thankfully, she finally got the hang of taking milk by the bottle and they let us take her home after five days.

We were glad to be home, but we struggled for a bit with being new parents to a preemie. We had to be careful who was around her since germs and viruses could be worse for her. I always worried about making sure she ate enough since she was so tiny and grew slowly. Thankfully, she was growing both physically and cognitively. She has continued to be on the smaller side compared to her peers, but her motor skills and cognitive abilities have always been on track. My son’s story was a little different. We knew that I was at high risk of preterm labor because our daughter was born early. Still, we never could’ve anticipated the surprises and struggles that came our way. At 29 weeks, I went to my regularly scheduled doctor’s appointment for a check-up. I told her that I was experiencing some discomfort, but nothing too concerning. She decided to check that everything looked ok.

With a tone of urgency, she said, “We are going to have to admit you to the hospital. You’re 3 cm dilated.” I was in disbelief.

At that time, we lived in Phoenix, AZ because my husband was going through a family medicine residency. He had just worked a night shift and was sleeping at home. Frantically, I called him to let him know what was going on and that he had to pick up our daughter from Pre-K soon. Then, I called my mom sobbing on the way to the hospital. I was scared of potentially having my son so early and worried about my daughter since I stayed at home with her most of the day. Thankfully my mom and sister were able to get on the next flight to Phoenix.

Once I was admitted, the nurses set up my IV and started putting different medications in to try to stop further dilation. I also received steroid shots to strengthen the baby’s lungs. The medical staff was able to halt contractions for the time being. My doctor decided to keep me admitted to the hospital since I was at high risk for preterm labor. I stayed in the hospital on bed rest for 3 weeks. During that time, my mom, mother-in-law, and husband’s aunt rotated to stay with my daughter. We were so grateful for their help. I don’t know what we would’ve done without them. I was finally allowed to go home at 32 weeks but needed to stay mostly on bed rest.

At 33 weeks and 6 days, my water broke. We rushed to the hospital and our sweet boy was born early the next morning weighing 5 lbs exactly.

He was put on room air for about 15 hours and didn’t need any oxygen after that. I guess those steroid shots helped him after all. The doctors and nurses continued to monitor him in the NICU for about 3 days. He then graduated to the Intermediate Care Nursery where he got 24-hour UV light treatment for jaundice. Overall, he was doing well and all tests were coming back with hopeful results.

The only obstacle left was learning how to eat. He had no sucking reflex so he stayed on a feeding tube for a while. Unfortunately, I couldn’t stay at the hospital as I did with my daughter. Every day, I would leave the house early every morning to get there by his morning feeding. I would try to breast and bottle feed but always ended up having to feed him through the feeding tube. Then, I would pump and go back to snuggle with him until the doctor came by around noon. Afterwards, I would go home to spend time with my daughter.

It was an exhausting period. I was pumping every four hours, traveling back and forth to the hospital each day, and trying to give my daughter quality time.

My husband was exhausted too. He would try to spend time with our son after work as much as possible, but it was hard since he worked at a different hospital. It was also emotionally tiring. I hated seeing him connected to different machines, reminding me how my body failed to keep him safe and comfy. Every day the doctor said we couldn’t take him home was devastating.

After a week and half in the hospital, there was still no progress with his feeding. On day 10, our son was fed up with the feeding tube and accidentally pulled it out. The doctor suggested we leave it out to see how he did feeding for the day. My son must’ve known he was ready because he finally ate from a bottle that day! His eating was monitored for the next few days. On day 14, we got the news we were waiting for. He could come home!

We were grateful that our babies were not in the hospital very long compared to some other preemies. It was still heartbreaking not to bring them home right away and worrying constantly about their eating and growth (cognitively and physically). I don’t know how we would’ve made it through those days without help from family and encouraging words from friends. How to Support Parents of Preemies

If you know someone with a preemie, here are some tips that other ABQ moms of preemies shared that they really appreciated:

If you want to learn more about preemie awareness month, you can visit the March of Dimes website or NICU Helping Hands. 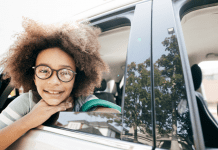 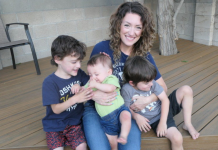