If you told me that my 10- and five-year-old would be playing nicely together during a pandemic, I would have thought it was a very strange dream that I’d soon wake up from. But my two oldest play Roblox together, and it’s been a great thing for our family.

Pre-Covid these two were constantly fighting. A younger brother who wished his sister would think he was cool. A boy who begged her to pay him any mind. An older sister who thought her little bro was the most annoying kid on the planet. She treated him worse than the little kids at school who bullied her. I didn’t understand it. He really is a funny, loving boy. But sibling rivalry, right? Surely, these last months have been hard. But for every terrible aspect of what humankind has experienced over the last handful of months, this is a win. My older babies are friends, and my heart is full. They also have a little sister that they both adore, but even she has been pushed to the back burner after this newfound bonding tool.

I periodically hear laughter or little feet running together, rushing to set up a gaming corner.

One time this kid on the game wrote, “Ezra sucks” in the chat, and my oldest texted back, “You suck!!!” Which normally, I shouldn’t be saying, “You go girl!” But, you go girl, amiright? How dare that kid mess with her brother? I was so proud. And he probably did suck, because he is 5, but he is having fun, and that kid can shut it. 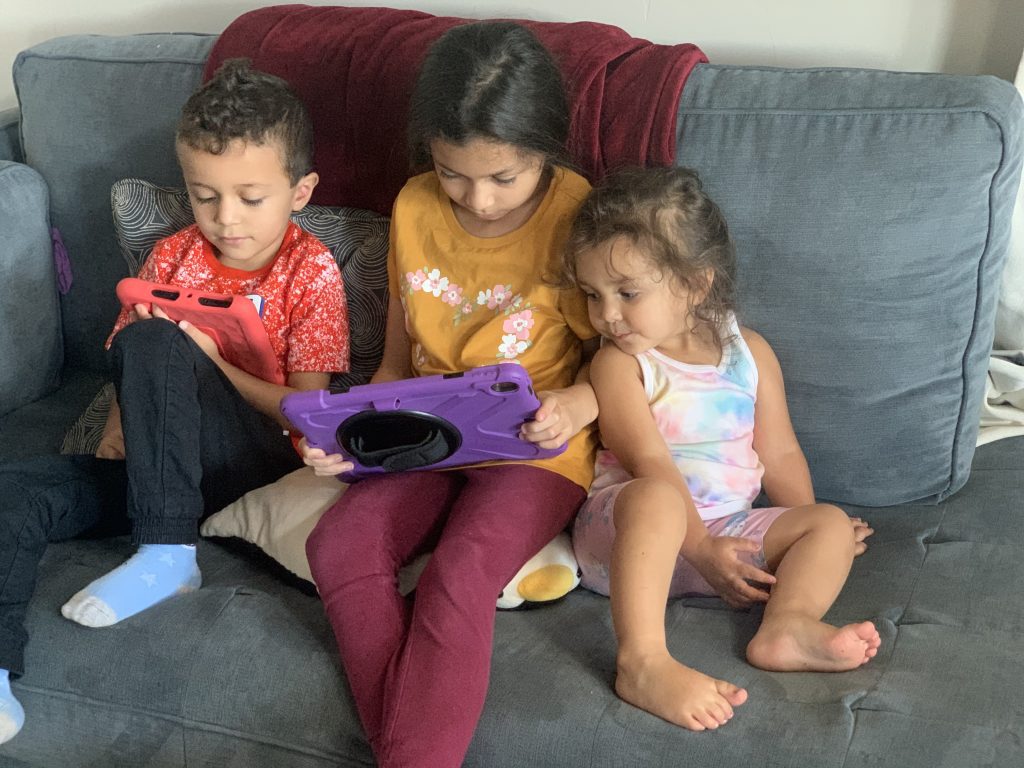 I know what some of you are thinking. You’ve heard the warnings about this game.

And a 5-year-old? What the heck am I thinking, right? Wrong. We are parenting during a pandemic. I think I speak for the majority when I say that most of our rules flew out the window at about week 2. Week 4 if you are really strong. And guess what? Everything is figureoutable.

Here is a guide that I found online. It explains what the game is, what ages it is suitable for, the safety aspects, and more. There have been times when I popped in and saw a game that was a little too scary for my son. The good news about that is that there are many other servers to join in Roblox and I can nicely tell him, ” Hey bud, I think this is too scary for you, please join another server that isn’t as scary.”

One of the really cool things about Roblox is it censors out the bad words. It literally will hashtag each letter that is either in a curse word, or another word that Roblox doesn’t think a kid should use. There are parental controls that can be utilized, and I can kick my kids off-line when they aren’t listening. My husband installed a Deco app that allows us to monitor online content and pause the WIFI for the kids. I do this several times a day so they aren’t tempted to sneak a device when they are supposed to be doing something else. My kids have rules when online.

They are not to tell anyone what state we live in, their ages, names. Some kids know their names because they have real-life friends who game with them. But they cannot give out personal information.

My daughter is an aspiring architect and engineer. So when she found out she could build homes on a server called Bloxburg, she was all for it. You will find her spending most of her ROBLOX time building homes. My son cannot because it requires Robux which is Roblox money. At age 5, I wasn’t ready to give him money to play an otherwise free online game. I am a REALTOR and my husband is a Cyber Security Analyst, former Computer Programmer Analyst. I can neither confirm nor deny that we have inspired her career aspirations in any way.

Another win-win is that I work from home when I’m not showing homes, attending meetings, etc. My husband works 100% from home. So I can send them to game while we are working.

And the little one can watch Youtube while they are playing. Yes, I allow my 2-year-old to watch Youtube while my other kids play. And there ain’t no shame in my game. I think this false-hood of having a color-coded routine and something to do all day, every day, for kids is just a fantasy for most. I know some people who are amazing at it, but it isn’t the majority, and I speak for my soul sisters.

If this is the way my kids fight less, hang out more, and excitedly converse over new tricks they’ve learned, give an occasional high-five, or run to gush to their parents about what level they’ve accomplished, then I am all for it! Thank you, Roblox, you have made parenting during a pandemic just a little sweeter.