Motherhood is an adventure. Fortunately, many have taken this trip before, and there are plenty of books to help guide one. However, occasionally this journey takes an unexpected turn on the road a little less traveled and with a lot less direction. So, what then? Panic! (I most certainly did.) Then you pull yourself together, ask for help, and stumble your way to Point B the best way you can. This is my journey of supporting my gay, nonbinary child.

Wesley was born in 2000. I knew from the moment I held that pink, screaming bundle that I would love that baby with all my heart. Forever. I wanted him to grow up knowing that I would support him and root for him throughout his life’s journey.

Wesley wasn’t a very “boyish” child. He preferred dolls to trucks, tea parties to roughhousing. He liked getting his nails painted pretty colors. I didn’t really think anything of it. What was the harm? If it made him happy, it made me happy. His father didn’t quite agree though.

There were many disagreements on how Wesley was “too feminine” and needed to “toughen up.” I’m ashamed to admit it, but I caved.

I detoured from the original path I set forth on when I started this motherhood journey.

The detour took us down a road nobody enjoyed. We signed him up for soccer, baseball, and Boy Scouts. Christmases were filled with stereotypical “boy” toys, most of which were never played with. His fingernails were no longer allowed to be painted; instead, he could paint only his toenails and only in clear paint. I didn’t realize it at the time, but I didn’t only deny Wesley the things he enjoyed. I denied him the freedom to be himself.

But who was Wesley? My husband and I suspected from an early age that he may be gay.  We had plenty of hushed conversations behind closed doors, but we never asked him outright. I didn’t care either way.

Heterosexual, gay, feminine, masculine . . . I just wanted him to be happy. He was my baby, and I needed to fulfill the promise I made to him the night he was born. I needed to get back on the right path of supporting my child.

I made our home a safe environment, free of judgment. And I constantly let him know that I accepted and loved him no matter what. I laid out the welcome mat and opened the door to talk to us when he was ready. I was supportive verbally and nonverbally but careful not to push him.

When appropriate, I started having casual conversations about homosexuality. I asked him non-threatening questions, such as his thoughts on same-sex marriage. I often mentioned how I didn’t care about the skin color or sexuality of whoever my kids chose to marry. Also, I started rocking Pride clothing. Finally, after years of gentle reassurance, he was ready to tell us.

Wesley called a family meeting. “I’m gay,” he hesitantly announced. I’ll never forget his sister’s reaction. She said, quite disappointedly, “That’s it?” I guess I did a pretty good job normalizing homosexuality.

Wesley looked shocked, and tears of relief streamed down his face. Those two words lifted an unimaginable weight. “That’s it,” I replied with a soft smile. Then I congratulated him, told him I was proud that he told us, and that I loved him with all my heart. Forever. Being a mother to an openly gay child was stressful. But admittingly, that stress was unnecessary. Albuquerque is a very LGBTQ+ friendly city, and most of my family was accepting. However, I still had this constant fear that society wouldn’t accept him and would treat him poorly. My fears quickly subsided when I saw that he flourished. He was happy. Or so I thought. There was something else Wesley was still hiding from me.

In 2018, a few years after coming out, Wesley informed me that he is nonbinary, preferred they/them pronouns, and goes by the name Peyton. I was dumbfounded.

What exactly was nonbinary? I had no clue. I was stuck in my tracks and didn’t know how to move forward. It was very unfamiliar territory for me although I knew I would work through it in time.

What do you do when you’re lost? You ask for help, and that’s exactly what I did. I asked Peyton to educate me. I wanted to understand what nonbinary meant to them and how I could support them. 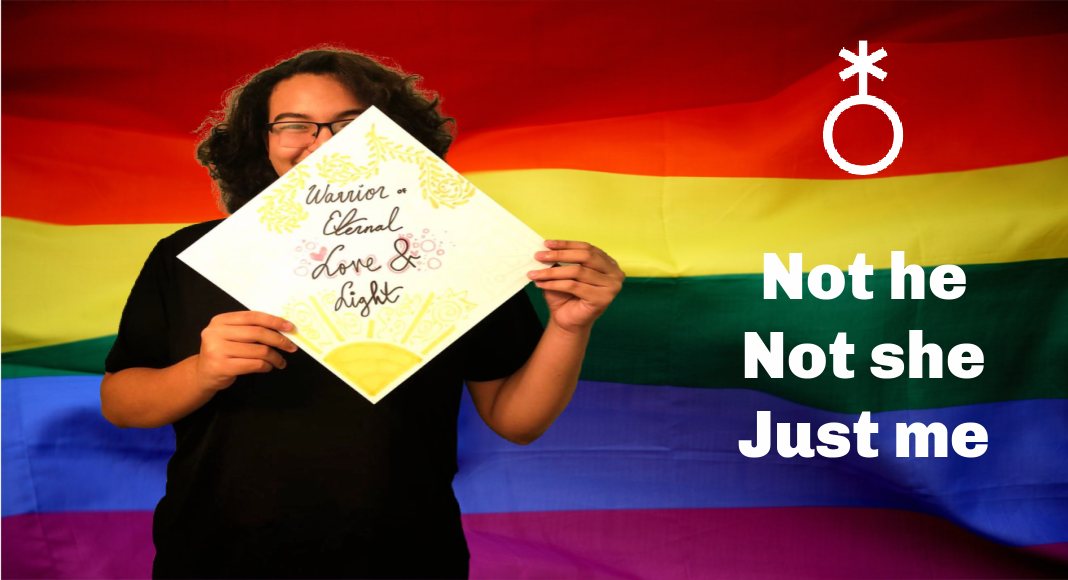 With Peyton’s help, I learned that nonbinary is an umbrella term for gender identities that are neither male nor female. A nonbinary person can identify as gender-fluid, Agender, or 3rd gender.

Peyton identifies as gender-fluid. They did give me a pass and said it was okay to continue to call them by their birth name. They never corrected me when I used the wrong pronouns. I appreciated this and took full advantage of it. It wasn’t until recently that I realized that I was doing the opposite of what they needed from me.

That’s the word Peyton used to describe what I did whenever I called them Wesley.  Deadnaming is when you call someone by their birth name that they no longer use. Deadnaming, either intentional or unintentional, forces the person into a gender category and dismisses their gender identity. It’s disrespectful and hurtful, and I was doing this to my child. I felt like the worst mom ever.

I had to redeem myself. First, I made an honest effort to use the correct name and pronouns.

I now know that using the correct pronouns matters.

It’s one of the most important ways to support your nonbinary child. It validates their identity.

Second, I normalized their lifestyle. Peyton likes to wear dresses and makeup. Last year, they got an eyeshadow palette and a gift card to a lady’s clothing store for Christmas.

Finally, I keep an open dialogue. I constantly let Peyton know that they do not have to hide who they are from me. That I love them with all my heart. Forever. And that I am the greatest ally in their journey of being their true self.