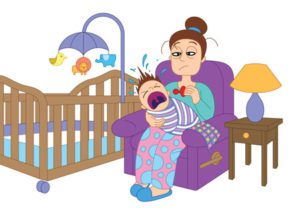 “I went to work with spit-up on my clothes,” my husband said to me days after our first son was born. “ I didn’t even realize it, until someone asked what the stain was.” I just laughed and thought, wow, I never in a million years would have gone to work with barf on my clothes pre-baby. How hilarious.

The things we sleep deprived parents do after having a baby. Below are stories from fellow parents who have done things that they would never have done before having kids. Trust me, these are definitely hilarious!
“I woke up many times burping my own chest, as I so often was patting a baby’s back at night putting them to sleep! I’ve also taken naps in the middle of the day because I got no sleep the night before, then immediately jumped up, thinking I’d forgotten to pick up my older ones from school, ran to the car with the baby, only to realize school pickup was hours away.” ~ Ericka

“I sometimes wake up so tired that I brew my Keurig without remembering to put a cup underneath it. And one time I left the house with a stinky spit up rag thrown over my shoulder and I was halfway through the grocery store before I realized it was there… And the baby was at home with dad!”~Andrea

“My husband was sleep walking when my daughter was only a few weeks old, carried a pillow into her room and tried to tuck it into her crib like you would a baby, while she was sleeping in it. Thankfully, he woke up just before. I woke up several times when she was brand new thinking I was breastfeeding and then when she wasn’t in my arms I frantically searched for her in between the sheets and covers. My husband had to calm me down a few times.” ~Katie

“My husband and I drop off our kids and carpool to work. I was so tired one morning, and we were running so late, that I just jumped in the car. It wasn’t until we met up with my dad to drop off the kids that I noticed I had forgotten to put on my shoes!!” ~Bernadette

“I’ve woken up several times in the middle of the night completely confused if I was in bed or the rocker and then had no idea where the baby was! Only to realize that I’d already nursed her, put her back in her crib and gone back to bed. I have given myself several mini heart attacks because this happens so much! I’ve also gotten disturbingly lax on how much pee warrants a washing. Like maybe my sons sheets have a little bit of pee here and there but do I have to wash it?! My daughter peed out in her Ergo and I had every intention of washing it, but that was several days ago and we’ve definitely used it since.” ~Missy

“I was so tired after having my third son, that I woke up frantically in the middle of the night and ran straight into a wall, re-corrected, and ran into his room. Then came back and went to bed. My husband saw the whole thing and said at the time it was hilarious but he was too tired to laugh”. ~ Bernadette

“I went to the store and had to nurse my daughter only to realize I forgot to wear a bra.” ~Sara

“I put my baby to bed sucking on a piece of ham. That was the only thing that would calm him down after three hours of non-stop crying.” ~Risa

Have a hilarious sleep deprived story? Please share in the comments below.