I find myself strangely satisfied by random and slightly odd things. I’m probably not the only one with oddly satisfying mom moments. Wait! Am I the only one?

Someone please tell me I’m not the only one who finds the act of dumping sand from my child’s shoes to be completely satisfying. Yes! You heard me. The sound of sand as it hits a trash bag makes me happy. I actually enjoy when my youngest plays in the sandbox at school because I get to dump all of that sand out for him.

I do have to admit, it is not nearly so satisfying when the sound is of sand slipping out in the car, or worse yet, onto someone’s bed. Perhaps that’s what makes the sound of sand hitting a trash bag such a happy sound for me. Maybe it’s the idea of the thousand other places that sand could be.

I will admit. There are other things I find myself enjoying without understanding why. I’ve decided I don’t have to understand why I like them. It’s ok to just find some humor or enjoyment whenever it pops up, because let’s face it, there’s plenty that can get us down.

Diaper blow-outs, lack of ice cream in the freezer, a child running straight into a wall for no apparent reason, another child telling a cover-up story about the first child’s wall incident, sand in the sheets, a continued lack of ice cream in the freezer . . . the list really could go on. So when I find myself giggling over strange things, I’m just going to accept the oddly satisfying mom moment as a gift and enjoy it.

Here are a few things that have made me giggle recently:

I know this is super lame, but I find it hilarious when my children are all working hard to make something cute and follow a theme, and I slip in a little something that doesn’t fit the mold. When I added this fancy cookie to a plate of cookies the kids had been working on, they all stared at me for a moment like I was off my rocker. And then, the giggles ensued. They couldn’t get over the idea that a cookie was wearing underwear. Well, somebody better wear them!

And the sound of giggling over underwear made me laugh. Who knew underwear were so funny? I guess Dav Pilkey knew. I bet he didn’t know they would be part of some oddly satisfying mom moments…on second thought, maybe he did know that one too. Speaking of underwear, I am also a huge fan of my children’s clothing choices as well as the poses they strike when a camera comes anywhere within eye shot. In the picture below, I love the white dress shoes with black ankle socks, along with black stretchy pants (with holey knees), and the fancy lace dress. The pose seems to be the “I’m cute and humble” look.

On the other end of the photo, you have to love the fingers in the pockets, the long scarf tied a little too tightly around the neck, and topped off with a Gryffindor robe. In the middle, the only kid in normal clothes (because his dad picked them out) is rocking a Spider-Man action shot.

Perhaps some of  you are thinking something like, “You’re so cruel. Why do you laugh at your kids when you could just help them become fashion savvy and adorable?” Have you met me? I’m all about independence and choice (and secretly laughing). Except when it comes to dumping sand out of shoes. Then it’s all about me and my oddly satisfying mom moments. In addition to the above, I find the following scenario to be hugely entertaining. My oldest son is currently seven years old, but is growing at a rapid pace. He wears a size 14. (That’s a whole story on it’s own! You should see the way people look at him when he acts his age instead of his size!)

The other day, he wanted to put on some snow pants. He grabbed a pair that were the color he wanted, not even noticing the size. He put them on, expecting them to fit. Then, he came to ask for help because he couldn’t get the zipper to go up. He was so frustrated and kept trying to make them work, and all his mother could do was laugh. I’m still laughing at the sight of him attempting to squeeze into a size 7. Maybe I can relate to the feeling a little too well. At the end of all those very long, busy mom days, it’s a huge relief when my children finally go to sleep. My youngest has been anti-his-bed lately. He bounces around and talks nonstop. It eventually gets quiet. Then I realize he has snuck out of his bed and into mine where he has fallen asleep in the middle of whatever dramatic play he was re-enacting. I should probably be upset at him. Instead, it makes me happy. Ah, how cute. The little tyke put himself to sleep in the big bed. Thank goodness he had a shower after he took off those sandy shoes and dumped them all over the car. Don’t worry, the head wound didn’t need stitches. 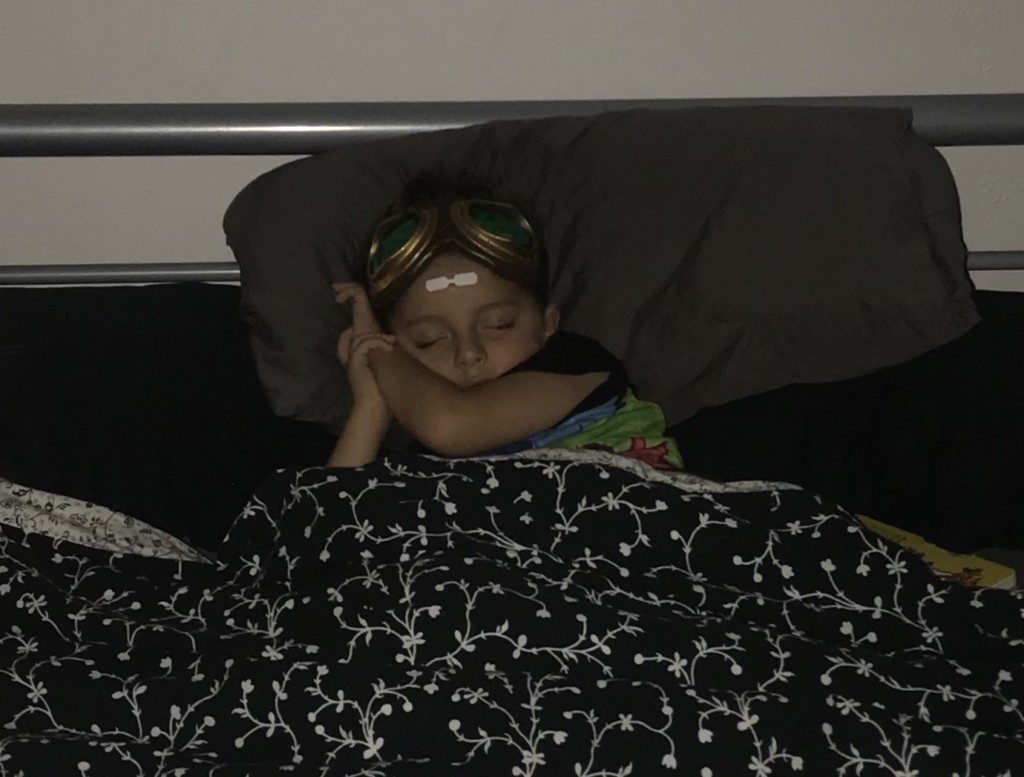 It’s a good thing we all sleep so well at night. That’s what enables us to wake up looking so great. Who wouldn’t want to go out as Spider-Ninja-Bat-Man? The old plastic candy cane is perfect for toting around little rocks or maybe even a grasshopper. Those gloves will definitely protect from leaving fingerprints behind (unless they’re wet and muddy, and then they are going to leave quite a few). And seriously, who needs shoes on the proper feet anyway? They run fast this way too, and they fill up with sand just the same. It’s a win-win! Or it’s an oddly satisfying mom moment. Come on! I know you have some oddly satisfying mom moments as well. We want to hear them! Or better yet, we want to SEE them!

Speaking of seeing these moments, does anyone else feel like you miss way too many such moments only to forget about them later? I do NOT have a picture to share for this last one. Anyone else giggle maniacally when you’re in the bathroom with the door closed (which hardly ever happens), and you hear a voice calling for you, and then you see tiny fingers poking under the door looking for you?

I can’t help it. It’s so funny! Why do they do that? What are they looking for when they put their fingers under the door? Do they really think you’re just standing on the other side waiting to hold their hand if they put it under? Do they just need to be that much closer to you? Whatever the lack of reason may be, I sure hope mine keep doing that trick for a long time. It’s one of my favorite oddly-satisfying mom moments.

I hope your days are full of things that make you smile as well. Enjoy them when they pop along!