I’m a holiday girl. It doesn’t matter what day or event it is. I’m probably celebrating. Especially the last three months of the year. You get Halloween in October, Thanksgiving in November, and Christmas in December. (Maybe you even get other holidays in December depending on your faith or your background.)

The only problem with these last three months is that the lineup has changed. It seems to me that it’s no longer Halloween, Thanksgiving, and Christmas. It’s more like pumpkin spice September, Halloween October, and then Christmas. So where did Thanksgiving go? To me, Halloween is the kick off to all fall events. You have the pumpkin patches, changing of the leaves, and cooler weather. Halloween moves in while I am still trying to pick out scissors for back to school. But just as quickly as it comes, it’s gone. As soon as Halloween is over, the decorations go on sale, and all the Christmas trees move in. The stores have moved on from Halloween right into Christmas. As soon as people start seeing the Christmas trees come out and hear Christmas music on the radio, that’s pretty much a goodbye to Thanksgiving. People get in the Christmas spirit and usually there is no back tracking from there. Christmas has moved in before the first week of November.

Which brings me to this next thought of why Thanksgiving is the forgotten holiday. I always thought of Black Friday as the unofficial kick off to the Christmas holiday. But over the past few years that has changed as well. That is why Black Friday has become my biggest nemesis. I mean is it Black Thursday or is it Black Friday? For one it’s not on Friday anymore. It’s on Thanksgiving Thursday. Hence why I think we no longer really celebrate Thanksgiving. Retailers do a good job attracting consumers to forgo their family dinners. I mean who wouldn’t want a 43′ TV for $125 or the new Xbox for $100 off its original price. People are lining up days before making sure they are first in line for “Black Thursday.”  Now, don’t get me wrong. I enjoy a good sale, but I just wish it would happen after Thanksgiving. Thanksgiving has a small section.

Thanksgiving does still have a small section in the stores. Those sections are right next to the grocery aisle. You can’t miss the hundreds of stuffing boxes, the multiple sized tins, or the pumpkin cans for those pumpkin pies. Sometimes if you shop early you can get the plastic leaf table cloth or maybe some paper turkeys for decorations. However, this aisle doesn’t change much even after Thanksgiving. That’s because we usually cook the same things for Christmas.

But I wanted to throw Thanksgiving a bone. To me, Thanksgiving is just as important as all the other holidays. Yes, I know it’s not as popular. You don’t get to go around asking for anything, nor do you wake up early to millions of “free” gifts. The idea of Thanksgiving is more than the turkey dinner or the traditional football game. It’s the idea of coming together with friends and family to enjoy that last few weeks of the year. It’s about giving thanks for what the year has brought and what it did not. It also allows families to address concerns and/or make plans for more upcoming gatherings. Thanksgiving is just that . . . giving thanks.

So maybe we can throw Thanksgiving a bone this year. Celebrate it before we break out the tree. However, if you already have your tree up as you read this, just know I support you too. Sometimes celebrating more of another holiday is just as important. But like I said, I’m a holiday girl, and I will be celebrating Thanksgiving this year. Let me know if you feel the same way or maybe you forgo the Thanksgiving holiday for sweet deals? 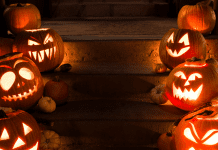 5 Fun Things To Do Before Halloween