It’s 2:30 a.m. and my alarm goes off. I jump out of bed. Yes, that’s right, I said jump. Why? Because IT’S BALLOON FIESTA! The most wonderful time of the year! As Crew Chief for one of the Dawn Patrol balloons, I will be jumping out of bed at 2:30 a.m. for nine days in a row come October. And I will love every minute of it.

Before I moved to Albuquerque nine years ago, I didn’t even know the Albuquerque International Balloon Fiesta existed. A friend of mine insisted that I go that first year, and I haven’t missed it since. As a spectator, I loved getting to the field early to watch the balloons set up. I’d get my coffee and breakfast burrito so I could walk around once the balloons started to launch.

However, there was one aspect of it all that I was dying to try. CHASE CREW. Everyone knew I wanted to do it SO BAD. And then one year my chance came, and I’ve been hooked ever since.

Experiencing Balloon Fiesta as part of a chase crew is completely different than watching as a spectator. Here are some details you may have always wondered about. One quick note though. Our balloon is part of Dawn Patrol, which takes off before mass ascension. So some things I will mention may not be true for other mass ascension balloons. First of all, yes, chase crews do have a separate entrance.

Well, actually there are a few. Which entrance/gate you are assigned to depends on which part of the field you launch from. The field is a massive grid and each balloon is assigned a square. There is also a crew lot where additional chase vehicles are parked. You are only allowed to have one vehicle on the field when balloons are launching.

No, the crew doesn’t get paid.

I know there are a few balloons out there with a paid crew, but the majority of us are volunteers. We do it because we LOVE it, because it’s exciting, and because we sometimes get to go for a ride.

So what exactly does a chase crew do?

When we first get to the field, we get the balloon off of the chase vehicle and start to get it put together. You literally start with a basket, the envelope (the fabric part), and a bunch of parts. Our balloon is particularly lightweight, so the burner and supports have to be put together and attached to the basket along with all the instruments (GPS, altimeter, radios, etc.). Then we lay the basket on its side and carefully attach the envelope with cables. Once it’s time to inflate, things move really quickly. A big part of our job is crowd control, keeping people close but clear of the balloon as it inflates. One of us mans the fan used to blow air into the envelope before the burner turns on to heat it. There are also two people who hold open the mouth of the envelope to help the air get in.

Another key job is the crown line. This is the rope that is attached to the top of the balloon. The person holding the crown line is keeping the balloon straight as it inflates and also prevents it from tipping over once it is standing up. You’ll hear crew telling you to stay away from it and to keep a path clear because we have to move a lot and also have to run it into the pilot just before launch.

After the balloon launches, we load the inflation equipment into the chase vehicle, jump in, and head off to follow the balloon. One of the fun things about the actual chase is never knowing where the balloon will end up or how long it will fly. If the conditions are good and the pilot is comfortable, it can be hours. I think the longest flight I’ve been a part of was almost three hours. Once the pilot figures out where to land, they radio the crew and let us know. Then we have to figure out how to get to them. Sometimes the balloon is easily accessible by road. Other times we have to get creative. We have carried the balloon over fences and hills many times.

We get the balloon deflated, taken apart, and packed up. Then we head back to the field. At this point, some people head home. Most of the pilots stick around to tailgate and attend workshops, and a lot of the crew will hang out for a while and unwind. Balloons literally go where the wind takes them.

As you go up into the sky, there are layers of wind. These layers go in different speeds and directions and are dependent on the weather. Balloon pilots can control the up and down movement of the balloon and use these wind layers to get where they want to go.

I think most people are familiar with the box that is mentioned each year. Basically, there is normally a lower layer of wind that will move a balloon north as it takes off from the field. If the pilot then moves up, the wind shifts to the south, and then they can move down to complete the box. Higher up, there are even more layers of wind that can go in any direction. To see what the wind is doing, a helium balloon with a glow stick inside it is released each morning and watched as it goes through the layers of air. The pilots also consult various weather reports to see what the winds are forecasted to do.

If a balloon lands in your neighborhood, go check it out!

One of the best parts about landing in a residential area is getting the people nearby involved. As long as the conditions are ok, the chase crew will often ask spectators to help get the balloon down. We also try to let the kids get in the basket for a minute before we deflate if we can. The best thing you can do is head towards the balloon, ask if you can help, and do what the crew and pilot ask. Safety is always first!

Also, if you are driving down the street and come across a balloon. STOP! Someone will let you know if you can pass by or if you should wait. Once the balloon is on the ground, we can usually move away from any traffic. Otherwise, we will move as fast as we can to get out of the way. 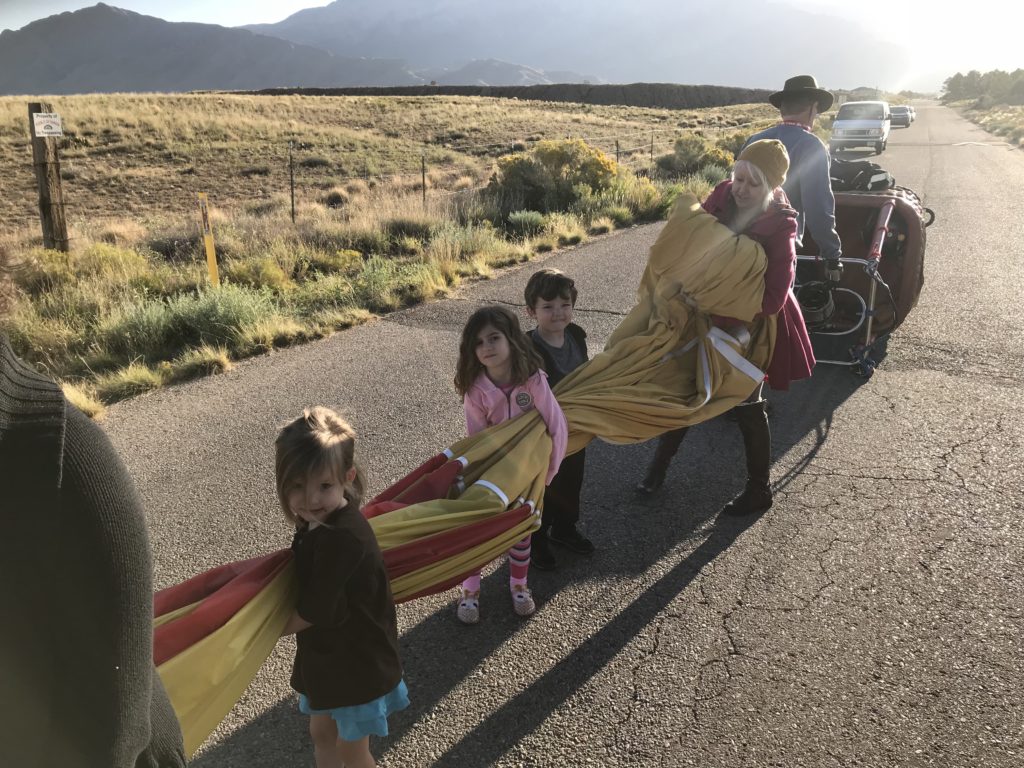 Yes, pilots really do carry a bottle of champagne on each flight.

This tradition started after the first balloon flight in France in November of 1783. The story goes that the first hot air balloons were so smelly and smoky that when they landed, the peasants were convinced they must be sent from hell and the beings aboard must be demons. To prove that they were true Frenchmen, pilots carried champagne. This tradition continues today. If a balloon lands in your yard, the pilot will share champagne with you as a gesture of thanks and goodwill. (We usually have cheese and crackers to go with it too.)

So how can you join a balloon chase crew?

The easiest way to join a crew is to know someone who is already part of one. If they don’t need additional help, they may know someone else who does. This is how I became involved. I had a friend who was part of a crew and his girlfriend was looking for a crew for a pilot who comes from out of state every year.

Another option is to apply through the Albuquerque International Balloon Fiesta website. But this application closed on September 1st. (Be on the lookout for applications to open next year.) However, you can sign up on-site at the Chase Crew Headquarters. With so many balloons, someone always needs help!

What questions do you have about being part of a balloon chase crew? Leave them in the comments, and I will try my best to answer them. Also, come say hello if you see me during dawn patrol. I will be the one with a kiddo on my back!