I am not the best with dates, but July 27th is the day that I decided to quit breastfeeding. Enough was enough. I had every excuse in the book. Enough with the two hours to try and get my toddler to sleep while nursing. Enough with my other two kids wanting attention, while I poured my life and soul into our last baby. Breastfeeding was consuming our lives. Until about two months ago, my daughter was waking up upwards of seven times per night to breastfeed.

That is extremely unusual for a 15 month old. My husband didn’t want to watch her at night when I had work functions or the more than occasional ladies’ night out. I network a lot. My career depends on it. So we came to a compromise. He would night wean her if I day weaned her. I slept on the top bunk with my nine year old for two weeks, while my husband slept with our one year old in our bed. We ended up transferring our toddler to the bottom bunk and added a guard rail. My husband lays with her until she falls asleep and then sneaks out. He held up his end of the bargain. I, however, did not. As time-consuming as it was, I found it easier to give in and make excuses to continue to breastfeed. I wanted to keep her feeling attached and comfortable. I felt cruel taking that away from her. Maybe it had something to do with the fact that she will be our last baby, God-willing.

It was not this hard to wean our son.

I read all of the online recommendations and had a plan. I would eliminate a feeding every few days for a month once he turned a year old. I would not sit down while in his presence. We’d keep busy and I would steer clear of low-cut shirts. He went into the stroller and avoided the Ergo for that month. By golly, it worked like a charm! Within a month, he was no longer breastfeeding! So I tried this with my youngest. Some days we went all day without feeding. Then we would be three steps backward. It was like the more I restricted, the more she’d breastfeed, once allowed. This clearly wouldn’t work, and I was sure she’d be nursing well into kindergarten. We had a hiking/cabin trip to Jemez Springs scheduled for July 27th. If you remember my weaning method with my son, the main thing I did was keep BUSY! My family was about to be super busy in nature, and I could easily divert my outdoorsy toddler. So I figured this could go one of two ways. Either super successful or a nightmare. Guess what? It was super successful. Juliet loves to be outside. She played with snails, earthworms, dirt, rocks, sticks, and water. This was the perfect environment for weaning! I almost could have sworn that this kid never sucked on a boob. One day passed, then two, then three, then four. We were successful! She only napped in my arms, but she quit breastfeeding! I was sad, very sad. As all good things come to an end, so did our glorious weekend in the mountains.

Once we were back to our routine, Juliet was back to asking for “bobboo.” This was the tough part. She was miserable and sad. She knows that “all gone” means that there is no more. But she was yelling, “All gone! all gone!” and crying. This broke my heart. She refused to nap. She screamed her head off. So I adapted. I did not commit to four days for no reason. So we decided to keep busy. I grabbed the kids and placed them in the car every time it was time for her to nap. Was it ideal? No. But she got about an hour-long nap and woke up to a cup of water, a snack, and outside time. After about two weeks, she was completely okay with the ordeal. This was our new life, sans breastfeeding. I am happy to say that, looking back, this was easier than I expected.

Did it make me busier? Yes. Did it make things more difficult? Yes. Was it easier to just nurse her to sleep instead of getting three kids ready to go on an outing? Yes. But it was necessary. She is now more independent, my other kids don’t feel slighted, and I can do more things outside of the house because dad handles bedtime. My husband now gets more attention because she isn’t in our bed. It’s almost like we are newlyweds again. We are now able to enjoy each other more in our thirties. And our thirties are glorious! If you are soon facing the weaning season, my heart is with you. It is hard, mama! But you can do it. 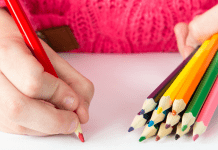 A Call to Action for the Safety of Our Children How We Survived the “Terrible Twos”