I recently read a book, Situational Ethics, by Rick Jordan that addresses dealing with a bully in a way that was definitely helpful to me. So I thought I’d share it with you too.

Rick Jordan is a speaker, author, and former pastor. He travels around the country speaking about his book Situational Ethics. But when Rick Jordan was a kid, he was bullied in high school by a teacher. “My dad stepped in and thank goodness everything was okay.” Jordan now has three children of his own. He helps his own children by teaching them to be leaders and to choose right from wrong. His older son recently had to deal with a bully. “We contacted that parent and got the teacher involved and brought it to her attention, and then everything stopped.”

When it comes to bullying, Jordan feels it’s important to notify the authorities and get the school or teacher involved. He has seen parents lean on the laws, rather than actually stepping in to help.

Jordan says legislating smart laws can help with bullying, but parents have to get involved. “Insecurity leads to bullying so parents need to be involved.” He also believes “kids can speak up when you give them a voice.” “80 percent of children get bullied on social media,” says Jordan. He believes in limiting screen time, but not in banning kids from social media.

Jordan says, ”It’s not always a negative thing and can be good in moderation.” Social media is a big part of society now. “We have to embrace it, it’s not going away.” Jordan says you should teach your children how to navigate it in a safe way. “If you teach them early they will thrive.” Jordan recommends “friending” your child on social media and knowing who their friends are. “An involved parent is an informed parent,” says Jordan. “Get to know your kids’ friends’ parents too.” He also advises teaching them the correct ways to act on social media. “There is a Facebook kids messenger app for kids as young as eight, but with parental monitoring built in.”

In his book, Situational Ethics, he shares stories from his own life about how to handle a bully and how to make ethical choices. Jordan feels it’s important now more than ever to focus on ethical teaching in today’s society. Jordan says, “the underlying point is… are you doing something to benefit yourself at the expense of another person?” Kids and parents should ask themselves that question each time they face an ethical dilemma. His acronym “K.I.D.S” is an easy way to remember the tips in his book.

Listen to what your kids want and give them open communication. Jordan says, “My wife goes in my kids’ bedroom and lays down with them and lets them talk. It’s helped them to know they can come to us at any time.”

Get to know your kids circle of friends and their friends’ parents too. Eat dinner as a family too.

Jordan says a lack of affection can make kids feel insecure. “Build leaders in your kids today by building up their confidence at a young age. When kids do something right be sure to lift them up and acknowledge it,” says Jordan.

Be sure to limit screen time and that includes TV, tablet and phones.

Jordan’s main goal of writing the book was “to help parents to raise their kids the right way.” He says he now sees many parents stepping up as leaders in their own households too, after reading his book. He has seen a change within his own family as well. “It’s been amazing! I’ve seen my kids rise up as leaders. My 11 year old son is a student ambassador now in the 6th grade. My daughter joined student council and is rising up as a leader. My youngest son sees me put out a great message in the book and on TV and I can see he’s not afraid to speak his mind.”

Parents can find more tips on how to deal with a bully and avoid this situation by visiting Jordan’s website. 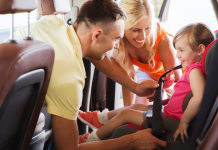