A while back, my son (about five months old at the time) and I met a lovely woman on an elevator. He smiled brightly at her, and she struck up a conversation about babies and motherhood. She was really sweet, and it was a nice little exchange.

But then, it happened: she reached out to touch my baby. She grabbed his little hand, smiling as she continued talking to him.

Warning bells went off in my mama head, but before I could think of what to do or say, we had reached our floor. So I smiled weakly and wished her a good day as we exited the elevator. Did that just happen?

Surprisingly (to me at least), this is a common occurrence. Apparently, many people think it’s perfectly okay to touch babies they don’t know without asking. I discovered this happened to several of my mom friends too, and not one of them really knew how to respond.

Why I Said Nothing

I was caught off guard, and I honestly didn’t know what to say or do. I felt extremely flustered and, in an effort to remain polite, I did nothing. Even though my mama instincts told me this was wrong, I didn’t want to be rude to this woman who was so sweet to me and my child.

I didn’t want to be judged.

My son was born during the height of flu season, and I did a lot of clean-hand inspections before I let friends and family touch my baby. But let’s face it, it’s a little awkward asking a grown adult if they washed their hands after coming out of the bathroom.

So maybe I didn’t say anything because subconsciously I thought I’d come across as an overbearing, germ-a-phobic, paranoid, helicopter parent.

But it’s a big deal!

I know I can’t shelter my son from everything, but so many pediatric illnesses and diseases are transmitted through touch. And of course, babies are especially susceptible to these germs!

The other thing is that this woman was a complete stranger. Unfortunately, the world we live in requires that we be vigilant when it comes to our kids. And though she was incredible sweet, I didn’t know her.

What I Wish I Would Have Said

Later, I thought a lot about what I’ll do differently the next time a stranger tries to touch my baby. I decided I’ll politely say, “Thank you for playing with him, but I’d appreciate it if you wouldn’t touch his hands because he likes to put them in his mouth.” I feel like that hits all the major things: it’s assertive, but polite; firm, but kind. It’s hard to know what to do when someone tries to touch your baby. I wish I would have had the courage to speak up, and I know I will in the future. It’s my job to be my son’s advocate, and if I don’t stand up for him, who will?

Has a stranger ever touched your baby without your permission? What did you do? 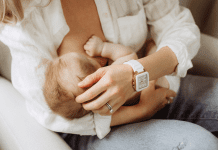 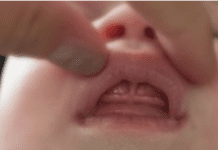